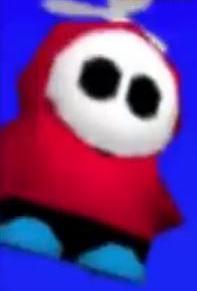 Fly Guys are a species of Shy Guy. Their appearance is identical to a regular Shy Guy, but with the addition of the propeller on their head which is used to fly. They cannot carry items, but they have the ability to spit fireballs at Mario (being the only game where Fly Guys produce fire), as well as dive at Mario to attack him.

Retrieved from "https://mario64hacks.fandom.com/wiki/Fly_Guy?oldid=12855"
Community content is available under CC-BY-SA unless otherwise noted.